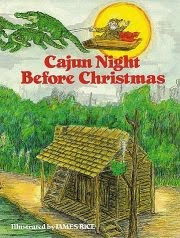 It is a long held tradition that this story be read here on our local television news broadcast every Christmas Eve, and really, in many, many households here along the coast. Heck we even have some folks up the street from me, who have a display of the alligators and skiff in their yard, yeah they do!

Click here to listen to the story from our local WLOX site. The video is in upper right hand side of page - press play to start it, or you can check out this reading on a video I found on You Tube. The costuming is a bit silly, but this fella does a pretty good job with it too.

'Twas the night before Christmas, an' all t'ru de house,

Dey don't a t'ing pass, not even a mouse.

Den out on de bayou dey got such a clatter... Make soun' like old Boudreaux done fall off his ladder.

He was dress in musk-rat from his head to his foot An' his clothes is all dirty wit' ashes an' soot.

A sack full o' playt'ing he t'row on his back. He look like a burglar, an' dass fo' a fack!

His eyes how dey shine...his dimple, how merry! Maybe he been drink de wine from blackberry!

His cheek was like rose...his nose like a cherry... On secon' tought maybe he lap up de sherry!

Wit' snow-white chin whisker an' quiverin' belly, He shook when he laugh like de stromberry jelly!

But a wink in his eye...an' a shook o' his head... Make my confidance dat I soon got to be scared.

He don' do no talkin'...gone straight to his work... Put playt'ing in sock an' den turn wit' a jerk!

He jump in his skiff an' crack his big whip. De 'gator move down an' don' make one slip.

Email ThisBlogThis!Share to TwitterShare to FacebookShare to Pinterest
Labels: Christmas