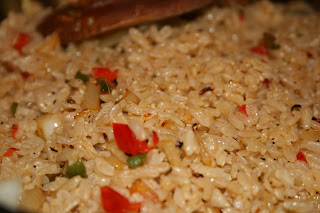 Since brown rice takes awhile to cook, generally I make a big batch in my rice steamer all at once and then will either keep it in the fridge to dish out as plain portions in a lunch wrap, or at dinnertime with another veggie, or sometimes I even freeze it in individual portions. Well, I had some I had stocked in the fridge but was gettin' kinda bored with it, and one evening I decided to try and jazz it up a bit, so I came up with this.

All I did was saute some onion and green and red bell peppers in a bit of olive oil. Once that was nicely softened, I stirred in the rice, seasoned it with a bit of salt, pepper and my new favorite ingredient, red curry powder and just let it cook, stirring occasionally, until it was mixed well and warmed through.

I mighta added a dash of Slap Ya Mama seasoning

too, but I honestly cannot remember. Slap Ya Mama is a Cajun style seasoning made by the fine folks at Walker & Sons, in Ville Platte, Louisiana. I suppose there isn't a kitchen down here that doesn't have some kind of Cajun seasoning in it, but I picked this kind up last time I ran out and it's become a favorite. Now this and some Cavender's Greek Seasoning

on some hot popcorn with a spritz of butter flavored cooking spray to kinda hold on to it and woooweeee I'm talkin' some good stuff ya'll!!

Wala... jazzed up brown rice. Pretty darned good if I don't say so myself! 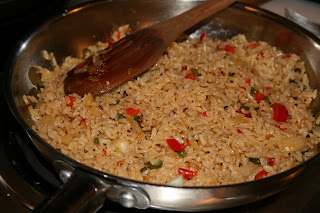 Email ThisBlogThis!Share to TwitterShare to FacebookShare to Pinterest
Labels: Rice