Isn't this just beeuteeful?  And no, hubs isn't in trouble... I swear! 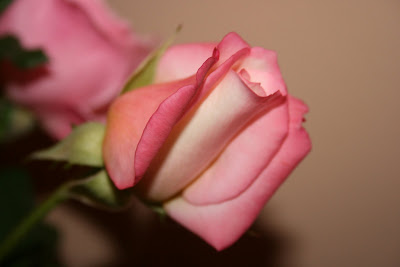 Gosh I'll sure be glad when I get over this cold or whatever it is. I have been waking up feeling exhausted and just downright blah the past few days. Besides the whole sinus thing and the headaches, this morning I woke up with a scratchy throat, chest congestion and even my ears are bothering me! Course there's this muscle ache too ... yet another reason I need to get back to walking I suppose!
Thank goodness I had that soup because there hasn't been much cookin' goin' on 'round here this week I tell ya!  I just finished off the last bowl of it so guess I'd better get around to whipping up another pot here soon.  Wish I had a chicken.  I'd really love some more of Rebel's pinto beans  (don't let that bald knobber scare ya!  Jus' scroll down about mid-page for the recipe) but we finished those off long ago and I don't have any in the pantry.  Darn it. Man those were good!

Have I mentioned I love roses? 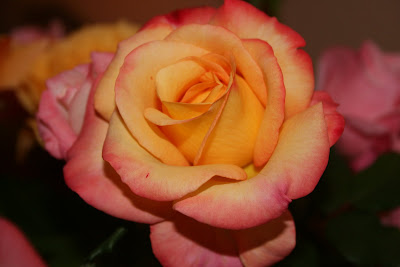 It hasn't helped that the hubs has been SNORING pretty bad for about a week now either because this crud has hit him much harder than me. Last night, he was having a coughing fit and you could hear the congestion in his chest, so I gave him one of those Mucinex tablets and then I coated him down with Vick's VapoRub all over his chest and even on his feet and made him put on a t-shirt and socks. He was resistant - especially about the feet thing, but I dunno... yeah, it's an old wives tale true, but like I told him, what is it gonna hurt, huh? Don't know if it helped yet though, cuz he had a dental appointment this morning and I must've nudged him so many times last night that he finally got frustrated, got up and slept the rest of the night (morning) on the couch, so I didn't see him before he left.  Poor guy but hey, after the dog fiasco last week and now this cold he and I are sharin' - I guess I'm pretty sleep deprived on top of also feeling under the weather. Ugh.

Anyway ... aren't these just too pretty? 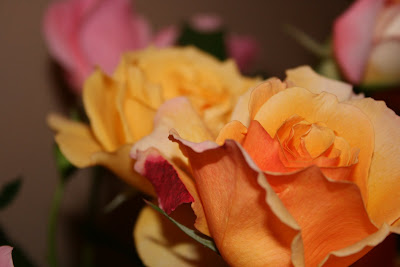 So, last night it got pretty darned cold here - actually it's pretty chilly right now still - but last night it mighta actually even hit freezing.  I mean you could feel it down to the bone.  Ya'll who live up north and actually get a winter prolly think I'm just bein' silly, but this is downright cold for this hot bloodied southerner!  So, of course I drug in a few of my potted plants, oh and my dogs.  They live outside mostly these days because not long after adopting them, I discovered that I'm highly allergic to their hair - stops me up somethin' fierce.
But anyway, yesterday evening, just as the sun was setting, I took notice of all these pretty roses in my rose bed and decided to go out there and pluck most of 'em up, just in case it did freeze and damage the blooms.  They were just too pretty to sacrifice 'em like that!
You see here, we barely have a winter - just a time or two where the temperatures drop at or below freezing - generally enough to kill off everything while the next day it's liable to be up in the 70s again.  Our plants down here just never know whether it's spring or winter I tell ya, and so my roses barely go dormant, but by the time the overabundance of rainstorms and stifling summer heat has played out, well those poor roses are pretty stressed and I'm usually battling blackspot or some pest problem to the point of where I end up having to trim them completely down at least once.  Of course that means very often when they should be going dormant instead they begin to get new growth!  So I end up with what I call late season roses, and I thought I'd show off what is likely my last bouquet till next spring.

Is there really anything prettier than a bouquet of roses? 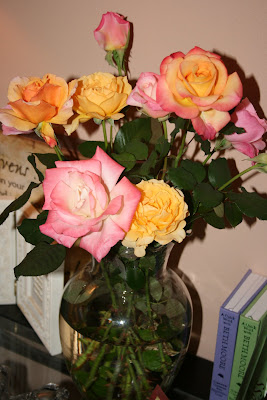