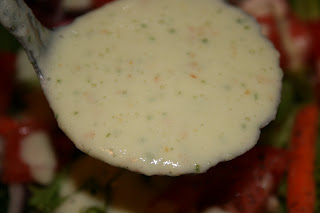 Well, you know what they say about good intentions. But hey ... ya gotta eat, right? And today I decided to have a salad for lunch.

Recently I was watching Gordon Ramsay's Kitchen Nightmares show and they talked about a Pomona salad dressing that got me curious about what that is. Trouble is, when I googled it, I could only find one recipe and that was at SparkPeople. So technically I don't know if this really is a salad dressing, or if it's actually really known by a different name and maybe just only originated in Pomona. Dunno, but when I saw this recipe had a combination of apples, cucumbers, yogurt and honey, I thought it sounded like an interesting combination of ingredients. 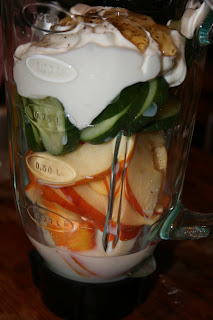 Well, it ended up being a nice, fresh and light dressing that I really enjoyed, though it seemed to be missing "something" that I couldn't quite figure out. I really think it needs to be well chilled, which of course since I had just made it it wasn't, but I liked it as something a little bit different. After I took the pics I decided to toss a couple ounces of smoked turkey on my salad. Edit: Definitely chill it for a few hours, but this dressing must be used up pretty quick as it separates and does not store well.

Pomona Salad Dressing
Adapted from a recipe at SparkPeople

Combine all ingredients into blender and puree until creamy. Chill for several hours. 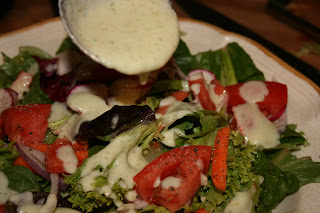