Ash Wednesday, Lent and Some Topics for Reflection 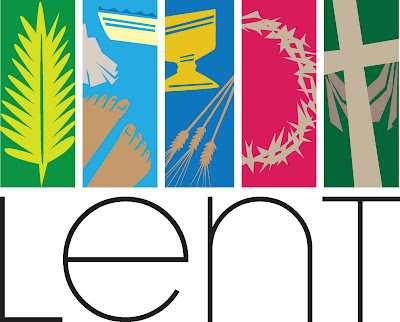 Lent banner Photo Credit: Bethesda Methodist Church
As Carnival and Mardi Gras ends and the last of the indulgences pass, we move into Ash Wednesday and the beginning of the Lenten season, which continues on for 40 days until the great celebration of Resurrection Sunday, or Easter. This period of Lent is a 40-day time of reflection where certain Christian denominations, in particular for us Catholic, consider the sacrifice of the Cross. In actuality, it is 46 days, but each Sunday is dismissed as a day of celebration, not meant for fasting!

Lent translates as "fast" and though it is not scriptural, it has become customary based on scripture and the period of time that Jesus fasted in the wilderness. Catholics observing Lent are required to fast only two days of the year, Ash Wednesday and Good Friday, and that means only one full meal is permitted (or two smaller meals that are less than equal to a "full" meal) and that meal must be meat free - though seafood, eggs and dairy are permitted. The remainder of Lent, Catholics should abstain from meat only on Fridays, but no fast is required so regular meals may be consumed, however they must be meatless meals, again allowing seafood, eggs and dairy.

Whether as Christians we are preparing others for baptism, reviewing and renewing our own lives, or coming back to the faith, Lent is a serious time meant for inward self-examination of our own sins in all forms, as we turn from them, putting our focus upon Christ and what He did for us, as we pray, repent, and allow the Spirit to do His work in us to make us more Christ-like.

Though not considered a Holy Day of Obligation, most Catholics do attend mass on Ash Wednesday and receive the mark of the cross on their foreheads, made with ash from the burning of the prior year's palms from Palm Sunday. It is a reminder of our mortality in that from dust we came and to dust we will return and to do penance and repent from our sins while there is still time.

✝ Do I give freely of myself, my money and time to help others, particularly those who are hurt, oppressed and strangers to me? Or have I selfishly held tightly onto those things for myself?

✝ Do I speak up when I see an injustice or a wrong, or do I worry about remaining popular in the eyes of others and stay silent?

✝ Do I treat my family as well as I treat my friends or those who have befriend me? Or do I tend to withhold my frustrations from the day and lash out at my loved ones?

✝ Have I been spending enough devotional time, alone and in quiet time in prayer with God? Have I allowed myself time away from the clutter and the chatter to hear His voice? Is it time for me to make that a priority?

✝ Do I extend the same grace that my Father has given me to others? Or do I hold onto anger and grudges and sometimes even openly share my frustrations about the other person with others not involved?

✝ Do I openly boast of my achievements or my accomplishments before others, or do I allow God to bring me the glory?

✝ What sins do I still struggle with that I might still need to address?

Many Christians traditionally make a sacrifice during this period, and this often means giving up something, though it can also mean adding something. More devotional time, to do something specific and regularly during Lent such as volunteering time to help the poor, or even vowing not to spend money on personal things and instead donate that money to a food shelter or battered women's shelter. Often when giving up something, that ends up being food for many of us and most often, sweets are the common thread. But, one could give up say using their credit card, or going out to lunch, give up dancing and partying at clubs, or drinking, or maybe you're known as the clown at work and so you'll give up pranks.

Or maybe, just maybe, there are a few people who might be served by giving up on leaving snarky messages on boards, and blogs and text messsages for 40 days. I'm just sayin' ...

For me, I love my cold drinks, and I know I will miss them, but that is what I have chosen to forgo, and when I have a thought of drinking one, I will reflect on why I am giving them up.

And also as is the tradition, most Catholics include another form of fasting by consuming only one meal and abstaining from meat at that meal on both Ash Wednesday and Good Friday (the only two times a year that Catholics are required to fast), and for all other Fridays during Lent, not eating meat, which for us down here, often means the consumption of seafood, although eggs and dairy are allowed. This fasting is meant to strengthen us spiritually, as hunger brings on a heightened sense of awareness.

I'll be putting up a link on the sidebar at Deep South Dish with some Lent friendly meals, most of which will be seafood based.

Email ThisBlogThis!Share to TwitterShare to FacebookShare to Pinterest
Labels: Lent