Tomato in a Bag Update 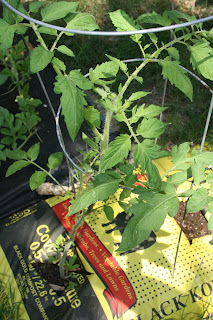 I swear - it feels like it's about 1000% humidity outside right now.

Remember when you were wishing your winter would end already and spring would come so you could plant? And you were in envy of those of us in the south for having an early spring and a long planting season?

Well, it is HOT down here in the Deep South. Already.

And, this is why the garden kind of craps out fast down south - you can barely stand being outside long so the plants get a bit neglected and suffer. Hey, it's me or them! It's a lot of work to keep plants happy and healthy down here with the heat and it comes quick, way before summer officially starts. Ugh.

I told y'all it wouldn't be long before you started hearing me whine about the heat! ;)

Anyhoo... thought I would catch y'all up on my Tomato in a Bag experiment.

If you're a regular reader, you'll recall that I put in brand new, raised bed, square foot vegetable gardens this year and I had some leftover tomato plants that had been sitting in one of those cheapo plastic cell packs for several weeks being neglected because I had no space for them. Well, I happened to also have a bag of Black Kow composted cow manure left and decided to experiment with planting 2 of those tomato plants in a bag of Black Kow.

Now neither plant was very healthy by this time, and I lost one of them pretty quick, though the other one seemed to be hanging on. I was also trying out the Topsy Turvy Upside Down Planter at the same time, so I picked up a couple of new tomatoes and planted one of them in the other side of the Black Kow bag. A "do-over" so to speak.

Well, that second plant also died, I'm pretty sure from root rot due to overwatering {see "The Ugly No. 2"} Apparently the Black Kow composted manure holds moisture pretty long and I was watering this plant the same as I was watering the raised beds. Yep. I murdered it.

But ... surprisingly, the original unhealthy tomato on the other side was still hanging in there. It was scrawny, with only a couple of leaves, and real tall and leggy, but it was alive!

As of today, I have not put another tomato plant on the other side of the bag, but that very first, original tomato plant - the one that looked so awful in the beginning - is not only alive, but {so far} making a come-back! That's it in the picture above taken this morning.

I kinda hesitated on giving an update to be honest, because it seems that every time I do, whatever I reported on goes south! But, it is what it is and as of this morning, this one - the original one I planted in the bag - is looking good, is bushing out a bit {and that is with clipping some of the leaves thanks to leaf miners that seem to have taken over my veggie garden} and actually has a couple of blossom buds popping up finally!

Email ThisBlogThis!Share to TwitterShare to FacebookShare to Pinterest
Labels: Tomato in a Bag, Vegetable Gardening