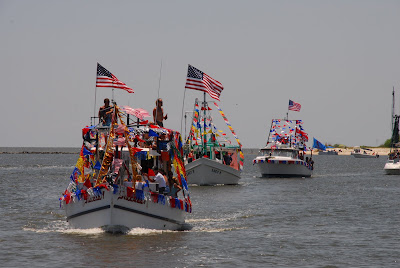 As I've mentioned before, my Paw-in-Law owns a shrimp boat, though his is more for the pleasure of being out on the water and getting shrimp to put up for Mom and him and the rest of us, than as any kind of commercial enterprise. In other words, he has a "day job," though I think he dreams of re-retiring soon and spending the rest of his days just fishin'. The Hubs trades his back and some hard work for the haul of a cooler or two full of Fresh-From-the-Gulf shrimp that I then put up in the freezer. Yes. I am a very lucky gal.

The Blessing has multiple events associated with it now, but started off born out of the tradition of the Catholic church of bestowing blessings. Though it doesn't always coincide exactly, the Blessing marks the opening of shrimp season here along the Coast. All of the shrimp boats {and pleasure craft too}, many decorated, form a procession out on the Sound {the Gulf of Mexico} and parade pass the boat that holds the priest and bishop who offer a blessing over the boats and it's crew, for a safe journey and a plentiful harvest. 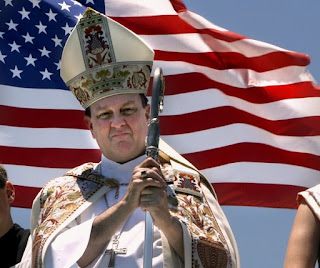 Growing up, all of the events associated with the Blessing, were always a very big deal, but as the industry faded due to the influx of cheap, inferior, imported shrimp and less demand for Wild American Shrimp, so did the ceremonies as there were less and less shrimp boats. After Hurricane Katrina though, it was revived and is now back in full force! Guess with all of the destruction we needed to revive some familiar things.

The events open tonight with a reception for the Shrimp King and his court - much like our Mardi Gras Royalty - but the real fun begins tomorrow, first with the Great Biloxi Schooner Race - that pretty much kicks off the Blessing of the Fleet weekend activities. This race of the White Winged Queens is a throwback to the late 1800s when the original wooden schooners were the ships working the Sound and the marshes to bring home shrimp for the Biloxi canneries. 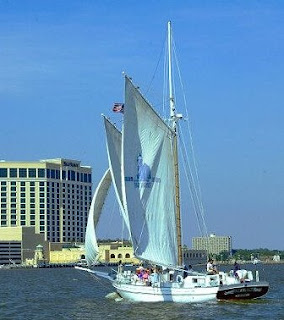 Then, beginning at 10:00 a.m. on Saturday and continuing on until 10:00 p.m., it's to the Biloxi Town Green for the Fais Do Do, best translated to mean a French street dance. This festival includes live bands, tons of food - including hot & spicy boiled shrimp with corn & potatoes, shrimp & grits, shrimp stew, barbecue ribs, Philly cheese steaks, roasted corn, roasted turkey legs, and hopefully those lovely Pusharatas from the Slavonian women like last year. There are loads of booths where you can buy hand crafted jewelry, various arts & crafts, home & garden stuff, books by local authors, local cookbooks, hand made local pottery, carvings, paintings by local artists, clothing, to name a few. There's rock climbing, inflatables, face painting and all kinds of stuff for the kids too. Mass is at 4:00 p.m. at St. Michael's Catholic Church and then it's back to the Fais Do Do for the Coronation of the 2009 Shrimp King & Queen at 5:30 p.m. and more partying. We do like to party here on the Coast.

Then Sunday there is the dropping of the memorial wreath at 2:00 p.m. in memory of all fishermen who have passed, afterwhich the procession of all the working and pleasure boats begins.

So, except for a quick fly-by to post the winners of the cookbooks {go here if you want a chance to win one} sometime tomorrow afternoon or evening, that's what I'm up to this weekend!

What are YOU up to this weekend???

Soooooo.... see y'all back here on Monday with more food! Till then, have a terrific weekend y'all!!

Go here if you're interested in learning more about the history of the Biloxi Blessing of the Fleet.

Email ThisBlogThis!Share to TwitterShare to FacebookShare to Pinterest
Labels: Blessing of the Fleet, Mississippi Gulf Coast Events and Festivals