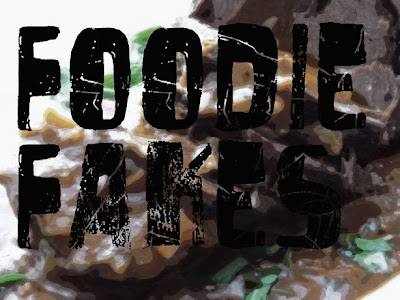 Fair warning. This is one of those Southern Style Hissy Fits I've told y'all about. I haven't had one in awhile.

Sigh. I ran across another one.

Those "pretend food bloggers." The ones that steal material from places like general recipe sites, or newspaper recipe blogs, or even other food bloggers, and copy recipes just about verbatim (or with very minor changes) onto their blog and then go out and snatch a photograph off of Google images (or Flickr, or Webshots, or Picasa, or whatev), stick that stolen image onto that stolen recipe, and create a post, making their readers believe it was a creation that they made in their own kitchen.

I won't call this guy out, though Lord knows I sure want to.

I will say that it is a food blogger who not very long ago started following me, so I went to check his blog out.  I was excited when I found that he was another food blogger who lives right here along the Gulf Coast, in another state, but very close by. It was cool to see a neighbor posting recipes similar to the kind I post, and he also very often attaches a piece of history about the food to his posts, which made his posts fun and interesting. I liked him, and I was impressed with the variety and wide range of amazing and delicious recipes he was posting, so I started following him back. Why, he even had his own cookbook he was selling on his blog.

But, as I begin to see such a wide variety of dishes being posted daily, and pictures that did not appear to be his, I began to grow suspicious of this food blog.  A recent post of a Creole recipe, a delicious beef roast cooked in a tomato based sauce and served over spaghetti noodles, just did not sit right with me for some reason. I sensed it being very familiar. By the way, that recipe is on my list to post, but is one of the ones that I have just not gotten to yet (but will).

So, out of curiosity, I did a search of that recipe and lo and behold, there it was, posted at the New Orleans Times Picayune newspaper nola.com website back in 2007 by a Miss Judy Walker, and copied - ingredients list and instructions - verbatim!  Another quick image search revealed the photograph he was using belonged to someone named Trinkets/BecR and was posted at RecipeZaar back in September.

Of course, there were no credits or linkbacks to that original person's recipe, or to that other person's photograph. This food blogger posted both the recipe and the photograph as if they were his own. "His" recipe, cooked in "his" kitchen, and photographed by "him." His readers were impressed with "his" yummy dish, as they have been with all of "his" other recipes. Now. I am not saying he does this with all of his recipes. Maybe feeling pressured to do daily posts he thought a time or three would be okay. Don't know. Don't care. Because to me, once is enough to put you on the list of Foodie Fakes.

Why does this deception bother me so much? Why does this kind of stuff eat at me? Why did I have to write this blog post about it? I mean, I'm not the food blog police or anything.

Most of my readers here know that I have another blog called Deep South Dish where I post southern recipes. And those who have followed me awhile know I've had two instances of finding other people had lifted my recipes and my photographs and used them to start a blog of their own, and while this time that hasn't been the case (but I think we know now at least one reason why he was following me now don't we?), it still disturbs me when someone tries to run a food blog off of the backs of others, yet pull it off as if it is their own work.

It's theft. And it's pure DECEPTION. And for the life of me, I don't know why this kind of deception disturbs me so much, but it does.

Oh heck yeah, I do so know. I know exactly why.

Because I actually do cook and photograph everything that I post, that's one reason. And it really is a lot of work between recipe development, shopping for the ingredients, cooking the meal and then taking dozens of photographs to get the right one. Then there's the post input and editing and photography uploading - it really is a great deal of work. I love it or I wouldn't do it, but I resent other people trying to pull off a food blog without actually doing the same work I do. There. I said it.

And you want to know why else?

Please forgive me here - but because I actually do the work behind my blog, all of it, well, my ASS can clearly attest to that fact.

Now don't get me wrong. We who do blog food, get our inspiration from magazines, cookbooks and even other bloggers. Most food bloggers like me, actually own hundreds of cookbooks and we subscribe to numerous magazines.

But the same way that the Rachael Rays and Paula Deens of the cooking world do, we take that inspiration and create our own recipes from those inspirations. We do not copy them verbatim, we do not steal other people's photographs and then try to call those recipes our own. That is theft. Period.

And, yes, even when it's not my material that has been stolen, it still turns my stomach, because deception hurts all of us. It makes us readers look like fools and it takes away the legitimacy of food bloggers and steals our credibility.

Wouldn't you rather see a food blogger who is authentic and sharing their love of cooking by posting their own recipes and photos a couple times a week, rather than one who posts recipes and photographs lifted from here and there across the net, just so that they can put up a daily post? I know I would.
at 5:29 PM