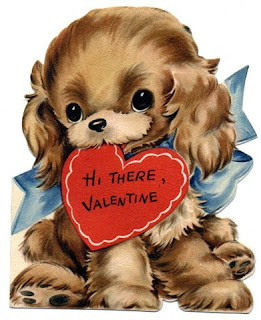 I had the best pre-Valentine's Day last night when I spent the evening holding my little granddaughter, who is now 6 months old, still immobile, of course, and just as pretty as a baby girl can possibly be. She is also hopelessly in love with her mother and can barely stand for her to be out of her sight for more than a moment.

The rest of the time I spent running around, chasing and playing with my 2 year old grandson, who was apparently on a major sugar high after spending most of the day with his Poppy (my ex husband) up north (loosely translated as north of I-10). He was full of energy, and of course Nana (me) brought him some mini Valentine cupcakes, and his mama allowed him one, and then reluctantly another, which he immediately took and crammed into his little mouth in one bite!

In an effort to hopefully calm him down a bit, I bathed him in his mama and daddy's big jacuzzi tub - since daddy and one of his friends was busy dismantling daddy's car (a Mustang Bullit) for some ungodly reason that men love to take apart cars, and were using his bathroom for cleaning up in between.  The big jacuzzi tub, which by the way, I would so totally be in love with if it were mine, was quite a lot like being in a swimming pool for my grandson, mainly because I had to call out to his mama about how to turn off the water from this fancy waterfall type of fixture. Understand, it is not my lack of intelligence, only that I have an older home with very plain and simple on and off handles. We got him dressed - not an easy task with a sugared-up 2 year old, only to have him near immediately and in a distressed tone say that he 'needed to go number two' and he was quickly undressed, after which, of course, instead of taking care of business, he then decided that he needed to run around the house naked! Finally corralled and redressed and still so full of energy even when The Cajun and I left, that I have no idea how his mama got him to go to bed. But... that is the joy of being the grandparent on this round.

Honestly I do not know how you young mothers (and I was reminded on Twitter last night, sometimes young fathers) do this all day!  It has been awhile for me, and then I never had more than one child, so I never had a two year old and a 6-month old to contend with at one time either. And I seem to remember my son being calm, but maybe that's just a memory thing, sort of like how natural childbirth and labor this many years later, doesn't seem like it was that bad back then!

To say the least, I was exhausted and slept, well, like a baby myself last night. I will not embarrass myself and share how late I actually did sleep in either.

I was going to try to scan in the latest picture of my granddaughter to share, but like everything else around here, including this author, the printer/scanner is also old and is being ornery and refusing to work properly today.

The Cajun is off to a buddy's house to watch the DVR'd Daytona race, which is actually on live right now, but he is waiting to watch it for his buddy time. I will be hanging out at home and hopefully getting at least somewhat caught up with some product reviews and giveaways that I am far behind on! At least there is just a bit of a gap between Mardi Gras and St. Patrick's Day!


I am about to bake a chicken - the Engagement Chicken to be exact - and while I'm not looking for a "ring," out of my chicken, maybe I'll get "lucky" and have a nice peaceful evening - which with a young puppy and young kitten and all these other critters around here (including the two legged Cajun one) is a rare occurrence and would be considered very "lucky" to me these days. Ah, and you were thinking another kind of lucky altogether there for a moment, weren't you?

Hope that you are enjoying your weekend and having a wonderful Valentine's Day.
at 12:50 PM