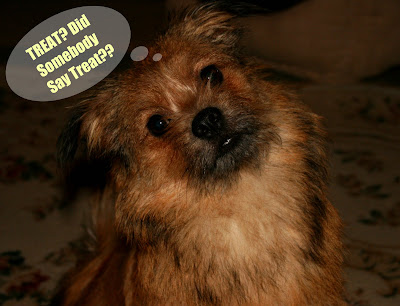 I often compare having a critter pet, particularly a puppy {or a toddler or teen dog, say, oh, under the age of 3}, to having young children, though young mama's roll their eyes at me when I say so.  But honestly there really are a few similarities, especially with a spastic active breed like this one, who appears to have some sort of terror terrier in him. Good grief these dogs have some energy.

He requires a lot of toys. A LOT of toys. Some because he needs the stimulation to keep him entertained, but mostly because he can destroy go through them fast. Which means that you have toys strewn from one side of the family room to the other about 99% of the time. Once he's down for the night, there's a ritual of scooping up toys to return them to his "toy box," just so you can see the floor again, and not break your ankle stepping on one of them later.

Then of course, while there may not be diapers involved, there certainly is potty training, or housebreaking, as in breaking your puppy of the desire to just pee or poop right where he is, i.e., inside your house - and that starts right away. So there are schedules for potty training. And trying to recognize the "I need to go potty signals." And coming back inside only to turn around and have to go outside. Ten. Times. In. A. Row. And ... the accidents that come along with it.

There's also a schedule for feedings and a schedule for naps, and apparently a highly stimulated breed like this must need to continue those schedules for some time, or else they get cranky and then drive every other animal within range crazy and start to get into everything. Mine must go down for regular naps every single day, at about the same time, and since his house breaking occurred with a crate, that is where he naps. In another room. Away from any stimulation. With a noise machine to cover any external noises. And covered like a bird so he can't see anything. And you have to be quiet. And pray nobody rings the doorbell.

Of course you must keep your eye on them at all times and be careful about what might be on the floor because, apparently this kind of breed wants to put everything in his mouth. And eat it. Everything. No. Really. EVERYTHING. If there is a speck of something that makes it way to the floor - a leaf or twig brought in on a shoe, a twist tie knocked off the counter, a piece of paper, a thread, piece of string, a tissue, a bobby pin, an empty toilet roll, you name it, if he can get to and find it, he will eat it.

And yes, sometimes, you even have to be careful what you say.

Husband, "I'm going O-U-T for a while. Need anything?"
Wife, "No, we're good. Since you're going out, would you check the M-A-I-L before you leave?"

Yes. I am convinced. He actually does know what we are saying, at least he knows certain words like those based on his reactions to those words, but thank goodness he doesn't spell. At least not yet.