Newest Resident on the Ranch 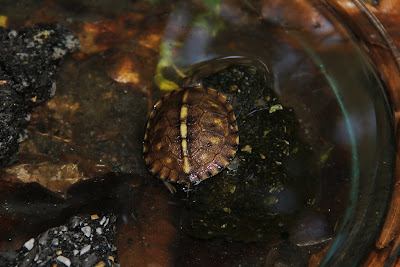 Boo was poking around a bag of dirt by the veggie garden the other day so I went to investigate to see what was so interesting to him and found this little baby cowering behind the bag. Tiny still, it fits easily into my cupped palm, and is apparently a fairly recent newborn though I'm uncertain of the sex. It was a pretty hot day, so I brought the baby over to a Pyrex pie plate filled with water and pieces of asphalt that I keep in the shade of one of my gardens, where it hung out for a bit before scooting off again.

Course, I don't really live on a ranch though sometimes with all the critters around here it sometimes feels like it! I've seen Lucy, my original turtle girl, but haven't seen the other turtle who I named Ethel, at all this spring, though I did see one of the babies - probably about 3 years old now, I suppose.

Haven't seen the baby possum recently, though the armadillo makes the rounds rooting around in the front yards every once in awhile. The raccoon who was visiting my back door frequently begging for scraps of food hasn't been around in weeks, so I wonder if the poor thing has succumbed to the modern perils of traffic in the neighborhood. I know there is another younger raccoon that comes around, but this one is much more shy and doesn't come to the back door, mostly keeping to a tree in the corner of the yard by my compost pile (which he can't get to anymore) where I'm sure he raids the dog food from the neighbor's dogs on the south side of our house.

Have I mentioned my girlfriend calls me Ellie Mae?

On a side note, somebody from South Korea landed on my site from a Google search for pictures of a "panty drawer."  Lord knows where my underdrawers are gonna be showing up now...
.
at 9:15 AM