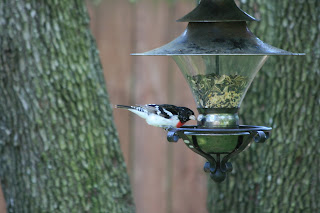 I love birds. All kinds of birds. I keep a very old pair of binoculars that were left behind after the passing of both of my parents, and they stay right at the french doors so that I can peek in on who visits my outdoor feeders. I haven't been able to catch the hummingbirds this year, though there have been several visitors. They are so tiny and difficult to catch at the right time.

I was honored however to watch the birth of some house finches in a hanging plant on my porch, all the way from the time that the mother laid her eggs until the time that they flew the coop. They still visit my feeders even now and one of them actually lets me get very close. I swear after all the peeking in at the nest when they were first hatched, I wonder if they recognize me! I can't recall if I ever managed to get a good photo of them - I'll have to go back and look. 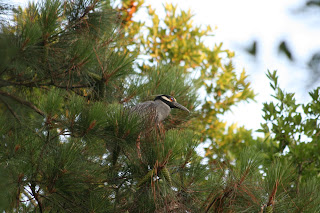 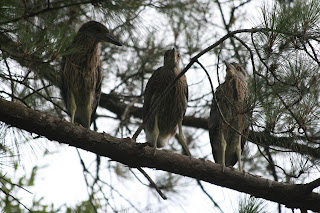 Then there was the occasion of these beautiful herons that were born way atop the pine tree in my neighbor's backyard. Fairly large birds, it was cool to watch the progression as they grew, and sadly 2 did not make it, but this is the mama and the remaining three chicks. To see the male and female parents flying back to tend to the nest and feeding was just awesome, and then they too moved on. 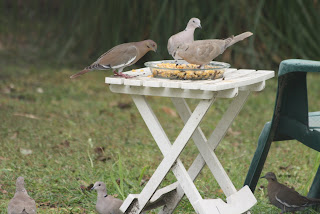 Lately though, I have been inundated with doves. I have been keeping a plate filled with squirrel food on a small table and the doves seem to have taken to the corn, often crowding out the squirrels, who I only really feed to keep out of my bird feeders and my veggie garden. Well, guess they have to eat too.
at 5:25 PM