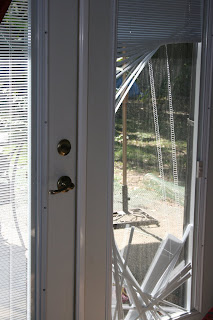 Today instead of studying, I decided to take on the project of installing the french door insert (or door lite as I have learned it is properly referred to) that has been leaning against the door for oh, I don't know... couple of month's now? I have the type of french doors that have working mini blinds inserted in between the glass, and one day when I was opening the blinds, they collapsed and fell apart and were just sort of well, halfway hanging in a messy mass inside of the glass looking pretty awful. After taking the trim off I discovered the blinds are sealed inside of the glass and so we would have to replace the entire glass insert. Luckily after calling the manufacturer I found out that the doors were still under warranty and so they sent me the insert at no cost, but installation would be up to me. The gal on the phone said that it was really easy to do, though I had my doubts, so when it arrived, we checked it, and then promptly leaned the box up against the existing door and put it off. Something I am very good at doing. And it's been leaning there ever since.

Well, today, with no problem postponing my need to get to studying on my CLE course, and my darling husband still sleeping, I decided that I would try to tackle the job myself. I don't know why I kept putting it off except that I guess I felt completely intimidated by the prospect. You see my husband is not a handyman. He's happy to lend his muscles when I need them because he is much stronger than I am, but as far as tasks that require concentration and focus, well, he just can't manage those. Anyway, of course I had to scrub down the door well on the outside before taking off the damaged insert, and once that was done, had to work a putty knife around the edges to loosen up the existing frame. Though the insert itself was a tad bit hefty to tote, it was overall a remarkably easy project to do, so now it is done and looks so much better and yeaaaa, I can check one of the household tasks off of the ever increasing "list." Maybe I'll finally get to tacking down those baseboards in the hallway from when the new floor was laid last year. Oh wait, I have to paint them first don't I? Geez.... Anyway, mission accomplished!  Now doesn't that look MUCH better? 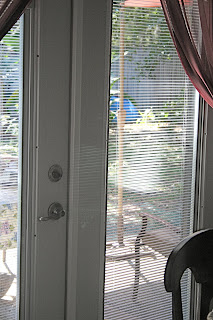 I had a phone call today from an Alabama law firm calling to confirm my participation at a mock trial this week. I recently had jury duty and though I did not make it to the actual jury, I did make it to the short list and so I earned the obligatory $45 for the inconvenience of having to get up and be at the courthouse at an ungodly early honor along with another 90 or so of my fellow citizens. Actually since I did get dismissed early, $45 is really not too bad for a few hours of inconvenience I suppose. Apparently I also earned a place on a list of jurors who had recently been called for duty, and so within a few days of that I received a call from this firm to see if I would be interested in serving on a mock jury. I have no idea what this mock trial is about, but I'm really kind of excited to participate. At my last job we actually used mock trials a couple of times on a few of our "sticky" discrimination cases but they were always held up in Oxford at the planning of our outside counsel and I didn't get to travel there and participate in them, so I can't wait to see what this one is like. This will be the closest I've come to returning to legal work since Hurricane Katrina robbed me of my career.

Made some shrimp spaghetti tonight for dinner. My my it was delicious! I don't really have a recipe per se, but once I get to typing up what I did, I'll post it. Guess I need to start pulling the camera out again too if I'm going to start including my recipes. Anyway, we finished off the last of my last batch of yeast rolls with dinner tonight so I have a new sponge bubbling right now and the timer just notified me it's time for the next stage. Now that I have the perfect recipe I cannot seem to bear to be without them! So I must take care of my dough, well that and Dancing With the Stars is just now coming on. Nite!
at 6:20 PM

Email ThisBlogThis!Share to TwitterShare to FacebookShare to Pinterest
Labels: Career, Home Repair, The Homefront, To Do List