Finally.... We Have Dirt! And Yes, Site Selection Matters. 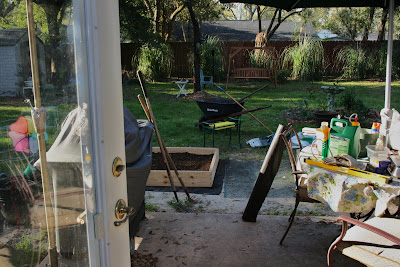 Yes, we have dirt! Finally. 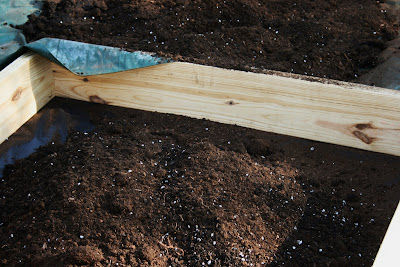 I haven't been posting a whole lot this week - especially recipes - because that is what has been goin' on out my back door. I really have been busy y'all!

I haven't cooked hardly at all this week either. {gasp!} And Hubs has been thrilled!

He doesn't get to eat out or eat fast food much since I cook all the time, but when you're busy diggin' in the dirt all day, well honestly you just do not feel like cooking too much when the day is over. So he has gotten both this week.

Can you imagine? A man who loves fast food so much, that he's thrilled to get to eat it over home cookin'?? Course he's spoiled, and I'm guessin' that after eatin' fast food for a bit, he'd be so ready for a real home cooked meal again. I'll be gettin' back in the kitchen and in fact, I have a good recipe for y'all later today, so don't give up on me!

As you see from the picture, I finally made a decision on the placement of the two 4 x 4 boxes. I put them both just south of my patio because that was the best sun all day. One of them is behind that messy patio table and yeah, I am okay with my raised gardens being that close. In fact, if I fill in the larger 4 x 8 bed I decided to do with veggies, I certainly could use one of both of these 4 x 4 beds for flowers!

Regardless - whether it ends up being veggies or flowers or both - I'm hoping that I'll tend to these raised beds better with them being in direct eyeshot anyway. While I really wanted to put those two 4 x 4 beds in that spot on the west side of my patio that was basically naked ground already, after watching that spot for a couple of days, there just wasn't enough sun for a successful veggie garden to thrive. I am considering later on doing two beds there for flowers though! (watch Hubs roll his eyes!)

Anyway, as you see, site selection does matter, so the first thing you must do when planning a veggie garden, especially if you happen to live in a subdivision on a standard sized residential plot, is to eye out where you think you might like your garden and then go ahead and just lay out your boards and watch for a day or two how the sun is on that spot before you do anything else. Your veggie garden really needs 6 to 8 hours of sun at minimum and you may find the spot you wanted to use just will not work.

And as you see in that first picture, I still have to fill in those two 4 x 4 boxes but I've been looking for some vermiculite to mix in and haven't been able to find any, so I've just about settled on using some additional Jungle Growth mix - which has some vermiculite in it, and then I'll add more compost to help balance out the mix. Which means I'll have to send Hubs back to Lowe's for more supplies.

Today I'll be working on finishing up filling in these two 4 x 4 boxes, and hopefully the 4 x 8 too. As soon as I can get everything typed up, I'll post the step by step for building and filling the boxes. Then I'll be ready to map out my grid and decide what to plant where!