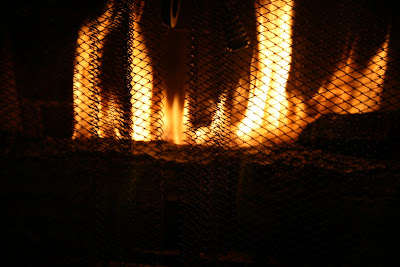 A fire starter made from leftover toilet paper rolls, dryer lint and scrapings from old candles you already having laying around the house - I seriously doubt you could find a more frugal fire starter than these.

When the weather turns cold for a few days - a rare event for us - I love having a fire going, and I am sure gonna enjoy one while I can! As soon as I open up the doors on the fireplace, these cats of mine seem to understand that there is a fire soon to follow, and they come and sit close by waiting for it. Right now as I type in my post, I am sipping on hot herbal tea, warming my feet by the blazing fire, there's football droning in the background, the house is all warm and cozy, and the cats are content and happy, curled up in their beds right in front of the fire. It's all good.

I figured this would be a great time to post my homemade fire starters that I like to use on those rare occasions where we do get to have a fire, and it is what I used tonight to start this one. I like these because they work well, but especially because they are free - using up things that would normally go in the trash and end up in a landfill! I have tried many different ways to get a fire going, and have found nothing that beats these, hands down.

Now I'm no fire building expert, so I have to caveat this post with one of those 'use this at your own risk' disclaimers of course, but I can tell you that I have been using these little starters for years.

All year long I save lint from the dryer and cardboard tubes from the toilet paper and paper towels rolls, that I just stuff into a plastic bag and keep in the garage. The only other thing you'll need to make these is some kind of wax. I generally like to use the tail end pieces of candles, since this makes good use of something you would otherwise be throwing out. You can also just grate up an old votive candle, which is what I used this time. 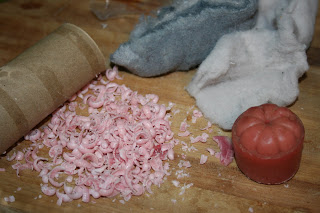 In one end of the tube roll, stuff a bit of the lint. 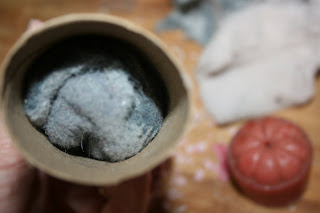 Sprinkle some of the grated wax on top of the lint - about a tablespoon or so. 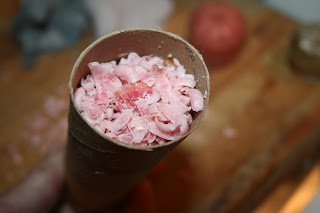 On top of that, stuff some more lint on the other end of the tube, so that the wax is encased in the middle of the lint. 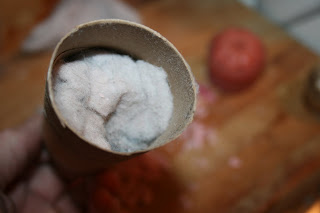 Pull out just enough of the lint to act as a wick on both sides. Place this in the midst of your kindling, add your logs on top and using a long tipped lighter, light both ends of the lint. Depending on how dry the wood is, it may only take one of these to get your fire going, but you can also just place one of these fire starters on each end of the wood and that will usually do it. 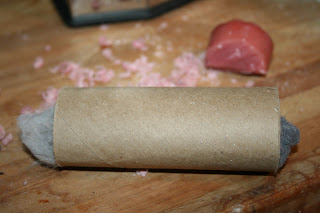 Sit back and enjoy your fire! 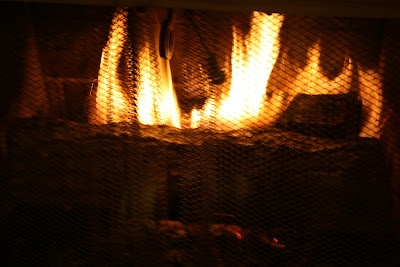 Grate up a votive candle or use small chunks of leftover candle wax.  Insert dryer lint into one end of the cardboard tube, top that with about a tablespoon of grated wax, and top that with some additional dryer lint.  Pull out a bit of the lint on each end to act as a wick, place in and under some of the kindling, add the firewood on top and light each end of lint.