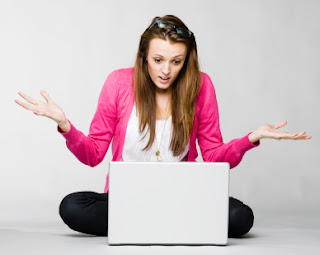 Remember that post I did a little bit ago about instincts? Well, here's one instance where I didn't heed the warnings and had to learn my lesson the hard way.

For months now, my laptop has had gremlins. I don't know what it is about laptop PCs but they are the worse these days! I have purchased 3 of them in the last 5 years and granted, while they were not the most expensive on the market, they weren't what I would exactly consider cheap either, so I can't afford to basically replace them every year or so!

Anyway, my laptop has been hanging up and generally misbehaving for some unknown reason for months, to the point that sometimes I would have to restart it multiple times before I could even use it.  You can imagine that aggravation.  I don't think it was a virus since I have pretty good protection, but I couldn't pinpoint the problems either.  I kept thinking that I needed to get my files backed up, but gone are the days when you could back up files to disk. Computers have gotten so capable of holding massive amounts of data, that you have to either buy online storage or get an external hard drive that holds at least terabytes. Yes, in this tech society, we have surpassed even the gigabytes! By the way, 1 TB is equal to 1024 GB - just in case you wanted to know that.

Do you think I ever got around to backing up my files? No.

It wasn't that I didn't intend to. I certainly did. But, I would think about it, procrastinate and put it off, and forget about it whilst I would be busy with blog work, developing recipes, cooking, messing up my kitchen and taking photographs of it all. Well, except for the messy kitchen part. Then, this past weekend, the inevitable happened. I had a complete system crash. Although I had set restore points - something that comes in handy if you have computer problems because it allows you to go back to a date where your computer did work - it did not recognize any of those past restore points. The only thing I could do to salvage the computer was to do a factory restore - basically a reformat to overwrite the hard drive.

I lost every single piece of work I have done over the past year. All of my documents. All of my recipe development. All of my PHOTOS. Yep. All of my family and personal pictures as well as all of my blogging food pictures - including several that were in the pipes to post... soon as I typed up the recipes. I lost it all because I did not back up my files.

In years past, if something like this happened it was pretty much a total loss, unless you hired a very expensive computer forensics person to try to find your stuff. You see, even though you think you have deleted files on your computer and you can no longer "see" them, they actually do still reside on the hard drive, at least until one of your computer programs overwrites it with new stuff.  So if you do have to reformat to factory new, it is still possible to retrieve your files by using data recovery software and not using your computer. Or you can take it to a geek shop and have them do it for you ... for a cost.

I'm a bit on the frugal side though, and a tad bit hard-headed and determined to beat computer problems on my own, so I'm trying to do it myself, and I'm in the midst of that recovery process right now. It is not a speedy process and the files you retrieve aren't going to be neatly categorized or organized like they were before.  In the midst of my own pictures are pictures from the net of virtually everything from every web page that I have looked at since booting up this computer for the first time. I also have a copy of every single Twitter, Blogger, Wordpress and Facebook profile picture that I have ever viewed, thousands of website buttons, pngs and gifs and other stuff I don't even remember ever seeing.

Granted I'm not complaining, because in the midst of all of that, I am seeing at least some of my pictures popping up too, so I have my fingers crossed that I can hopefully retrieve some of my stuff.

That means until this process is done, I cannot use my laptop though.  And, while I do have an old desktop Compaq PC - I've had it awhile, so long that I've forgotten how long, meaning it's pretty slow. I am fortunate that I have a newer desktop Mac, which I do love, but when you are used to using PCs all the time, it's hard to adjust to using a Mac full time. I am learning that Mac isn't fond of Google products especially in another browser besides Safari - and I've had some challenges with commenting on some of your blogs even with the Mac browser.

Let's just say it's been a frustrating week and it's only Wednesday morning.