Beautiful Sunday and Southern Colloquialisms of the Day 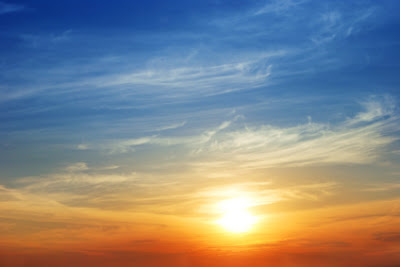 What a gorgeous beautiful Sunday it has been! It was so peaceful around here today. No screeching children outside. Nobody burning anything. No thumping stereos. Nobody sitting outside smoking heaven knows what and hacking their lungs up for all to hear. No loud people partying outside with loud music. Just a few birds singing and rarely even a car driving by. Peace. Quiet.

The sun was shining, the sky was blue, the temperatures were in the low-60s, and the air smelled fresh and crisp - enough to throw open some windows, and enjoy not only the rare quiet, but experience a nice brush of a breeze of fresh clear air, as it flowed from the front of the house to the back - at least until the sun began settling in the west behind the trees, and my feet got a little cold.

The Cajun and I slept in a bit, then had a late breakfast of homemade buttermilk pancakes, with Little Sizzler sausages, hot maple syrup and fresh brewed coffee. We watched a pretty funny comedy streamed through the Wii via Netflix (isn't technology just awesome these days?), called Death at a Funeral

, and then he left to tend to his service work, so I put on another movie, well, a mini-series really called The Pillars of the Earth

. I'd tried to read the book back when it was an Oprah book club selection, but never could quite get into it. The movie has been much easier for me to follow.

While that played, I seared a roast to put in the oven on a low braise - I love the smell that comes from the browning of beef in hot oil. Made a roux, then a nice gravy with some onion, and a few seasonings, and supper was in the oven.

I posted over at Deep South Dish earlier today, a collection of some Sunday Supper menu ideas because I am often asked the question at Facebook or on email, "what can I fix for supper on Sunday?"  I was quickly reminded though, that there is a distinct difference between what we southerners define as supper.

Just to confuse things even further, we, in the south, often use the terms interchangeably, just depending on the timing of when the bigger meal is eaten. Back in the day, after heading to the fields before daylight broke, and working hard all the day, people usually returned home sometime mid-day to consume the larger meal, our supper. These days, we're all working past sunset so we consume the bigger meal later, usually called dinner. So I might say breakfast, lunch and dinner. Or, since we tend to eat late on Sunday, I might just say breakfast and supper with no third meal.

Let's just say when we southerners say supper, we are generally speaking of the larger meal of the day - no matter what time it is served. On Sundays that is usually earlier than it would be during the week.  As Steve Mitchell, author of More How to Speak Southern

And by the way, while we are there, when we Southerners use the term "Yankees" we aren't meaning that at all to be negative, unless, of course, it happens to be prefaced by the term damn.  Then the meaning might be up for further interpretation.

Hope you have had a blessed Sunday also, or if you're reading this later, a beautiful week! God bless.
.
at 4:32 PM