If I'm Catholic and I Steal is it Okay... 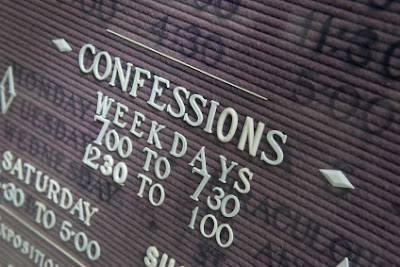 If I'm Catholic, and I steal is it okay... since you know, there's that whole confession thing?

First, before I offend anybody who happens to be Catholic, let me say that I was raised Catholic, so I'm not here to pick on the Catholic faith. I am of the Catholic faith (or at least I was until I became a heathen by marrying my current husband outside the church, but anyway...).

You see, one day recently I ran across a cooking blog, the title of which included a declaration of the Catholic faith. Now, I have to tell you. I didn't go searching out this blog, but rather it was one of those instances where I clicked though to it coming from one link on Facebook to another. Scanning through their Facbooks posts, I noticed something odd though.  In the little teaser blurb that comes through with the post links on Facebook, some words there rang very familiar.

Imagine my surprise when I clicked over to the post and found not only a recipe of mine posted there verbatim, but nearly my entire post, also re-posted there, verbatim. My thoughts, my words, my "voice" if you will. On somebody else's blog. A blog where the writer was willing to proudly proclaim their Catholic faith in the very title of their blog. They essentially copied my entire post, using their own pictures, but either deleting an assortment of my words here and there, or adding in a few of their own, but otherwise using my words as their own.

It was heartbreaking to me for a couple of reasons.

First, even though it's unfortunately actually happened to me quite a few times since I started blogging a couple years back, it's mostly with recipes being posted verbatim. Oddly it's rarely (if ever) on a recipe I adapted from a magazine, or a cookbook, but usually it's my own original recipes that I have actually written myself that get taken. This time it was not only the recipe part of the post, but the post itself. My story. My words. My voice.  One thing I can tell you for certain, when you run across that, it's like a stab in your heart - whether it's the first time, or one of many times.

I realize that many food bloggers don't write original recipes - they mostly adapt recipes from other sources - not a thing wrong with that. But... when a blogger does write their own original recipes, a lot of work goes into it. It's practically a birthing process, and for some of us, it means that we actually made that recipe over a few times before we published it, so it's a birthing process where we "ate for two" so to speak! To have somebody just lift it, often word for word, and take credit for it, well, I can only liken it to walking into your home after a long day of work, only to find that a thief broke in and violated your space, trashing your house and stealing many of your possession and damaging treasured belongings. The space never quite feels the same after that.

Second, no matter how many times this happens, it troubles me that anybody would feel that it is okay to take another blogger's work and re-post it on their blog as it it were their own. It's stealing. It's theft. Period!  How can anybody feel right about that? I just do not get it.

Most importantly to put yourself out there as a "faith" based cooking blog and then blatantly steal somebody's else's words and work, paste it onto your faith based blog, and then think that's okay. I'm sure she thought I would never in a million years ever visit her blog and find it. But... where is the conscience there that would prevent you from doing that in the first place?  As a person of faith, where was the internal conflict between right and wrong that should be there?

That post of my stolen words had several comments from her readers.  It bothers me that her readers were misled.  Deceived even.  It is one thing to be manipulated by brands, by advertisers, by politicians, even by bloggers who create these personas around their "brands" that are not really their authentic selves, but created selves of what they think will draw us to click over to read them. And the good Lord knows... I am nowhere near perfect, but to put yourself out there publicly as a person of faith, and then steal, and then lie to the readers who believe and trust and befriend you by faithfully reading your blog and commenting. That is horribly troubling to me.

Yes, I contacted her by email. I couldn't help but tell her how I felt about what she'd done and yes, she did remove the post. But, coming from a person of faith, I have to say I did expect some humility. Maybe even an apology. She never even acknowledged my email. Just took the post down, and went on to the business of blogging. And to me, that is truly the saddest of it all.
.
at 5:28 PM