The Dark. The Quiet. The Suffocation. 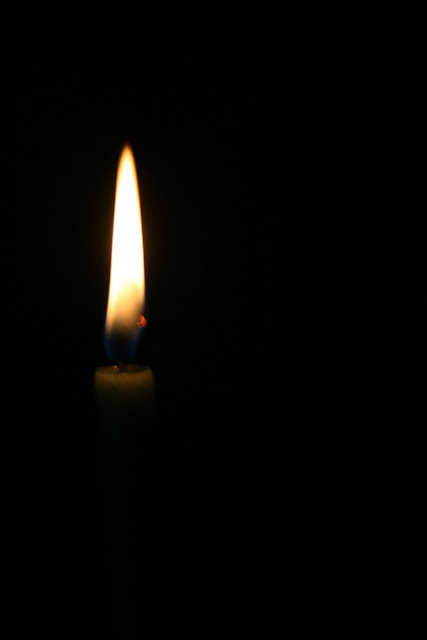 Wow, have I been a bit remiss in writing here lately! Well, it's not because I haven't had things on my mind. I certainly have.

But the weather has just been too beautiful here the past week to spend much time inside or on the computer. We've had an unusual bout of fall-like weather which has made it unseasonably cool and lovely for August in south Mississippi. So besides my grandson's 2nd birthday, and the christening of my new granddaughter, I have been catching up on errands, finally got my dwindling pantry restocked, and also finally got some yard work done - other than the cursory quick pass of grass cutting in between all of the rain showers we were having so your neighbors won't hate on ya. It's amazing how much better the yard looks when the trim work and weed pullin' is done.

That said, last night, suddenly out of nowhere and in the middle of an episode of The Cleaner, on an otherwise quiet and gorgeous evening, we had a power blackout.

After about 2 minutes of this odd silence and an itchy, uncomfortable feeling that had me feeling like my skin was crawling and I couldn't sit still, The Cajun finally said what I was thinking.

"This reminds me of The Hurricane."

It's funny how something as simple as a blackout - in the midst of no storm, no lightening, no thunder, no rain, but instead really beautiful & cool weather - would instantly transport us both back to That Event and become an instant reminder that we are, indeed, and despite the beautiful weather lately, still in the midst of hurricane season. And here, just days away from the 4th anniversary of Hurricane Katrina, That Storm was immediately what this blackout brought to both of our minds.

I think that's a perfect example of post traumatic stress and shows even 4 years later, just how much That Storm so strongly affects those of us who live - and in some cases, lived pre-Katrina, but no longer live - along the Gulf Coast - and no, not just in New Orleans.

What a terrible time that was here, especially in the first week and a half, where there was no electricity of any kind - no lights, no television, no air conditioning, no ice, no running water, no toilet, no showers, no phone, no internet, no computer, no outside communications with each other much less the outside world, and nothing but destruction everywhere you went. We were hot, we were sweaty, we were dirty, we smelled, we were hungry, and we were literally worn down. It's funny that when the power went down last night, that is where my husband and I both went mentally.

And for me at least, there was just this awful, uncomfortable feeling I couldn't put my finger on.

There were no storms, certainly no hurricanes. We had no idea what caused this blackout. But instantly I could not sit still. I was in this odd place of nervousness and didn't really know why.

Except. I do not like the dark. Because when the power goes down at night, it is dark. Really dark. You don't realize how dark dark really is, until you have no light. Nothing good can happen in the dark.

But worse than the dark, which can at least be remedied at some level with flashlights and candles, is the quiet.

I almost always have noise around me. Even when I am working, or blogging or even reading, I have some kind of background noise going on, whether it is the television or the stereo, or some household appliance - there is always some kind of noise going on. Even when I sleep at night, I have to have a white noise machine going or I cannot sleep. The silence, to me, is deafening. When there is a blackout there is a kind of quiet that is totally unnerving because, except for the occasional dog barking in the distance, there is no noise. Nothing. Only complete silence. I can only liken it to death. Dark. Quiet.

And then, there is the suffocation. Not only is there the fact that for whatever reasons, I was blessed with a body that is heat intolerant and that no matter how hot I get, I barely sweat, so my body temperature starts to rise and I get overheated. But for me, as soon as there is no air conditioner to circulate and condition air in the house, I begin to feel claustrophobic. I begin to feel the house close in on me and the only place I don't feel that is outside. But outside it is dark. And quiet.

After about 30 minutes I couldn't take it anymore. I demanded that The Cajun help me to drag out the generator, the gasoline, the heavy duty power cords - because after Katrina I swore I would never experience that absence again. I needed Light. And Noise. And the Movement of some kind of Air. And I really needed to get away from This Feeling.

And then, just about the time we were about to set the generator up on the patio, the power came back on. This sense of relief immediately washed over me and I felt the anxiety release. The lights were on. There was once again noise. And the world was back to right.
at 3:15 PM